In the beginning of May 2009 a contaminated car was discovered by the vehicle monitoring system at Forsmark NPP in Sweden. The inside of the luggage compartment was found to be contaminated, but there was no specific contaminated equipment or goods.

After a retrospective reconstruction of the actual use of the car it was suspected that goods, transported from RCA by the same car one week earlier could be the source of the contamination. Before the goods had been taken from RCA they had been used during construction work in a room where surface contamination may occur. The contamination emanates from the reactor coolant system. The goods, mainly consisting of some buckets, a concrete sack and tools for construction work, were tracked to a storage location outside RCA but within the NPP industrial area.

All the contaminated goods were transported to RCA and cleaned of loose contamination. Also the storage outside RCA and the outside areas were cleaned.

The total activity spread by this incident is estimated to 25 MBq, mainly corrosion products normally found in the reactor water system. About 6 MBq of the total activity had remained in the car when the contamination was discovered.

The incident was reported to the competent authority as soon as possible. It has by the NPP been judged to be outside the INES scale. 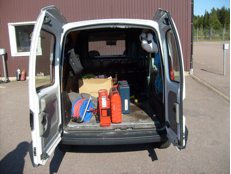 A root cause analysis has been performed which recommended a number of countermeasures in order to avoid this type of incident in the future.

Before removal from RCA the goods had been searched for contamination by the RP staff. No contamination was detected. However the goods were taken out from RCA one day after this check was performed and no repeated measurements were made. It is assumed that it was during this time the goods were contaminated, but it is not possible to say how. After this incident the procedures for taking goods out from the RCA have been changed and it is now only permitted to take out goods with RP staff present and immediately after the goods has been cleared to be free from contamination. Contaminated goods shall of course be treated as a transport of radioactive material when leaving RCA.

Other countermeasures that will be considered: